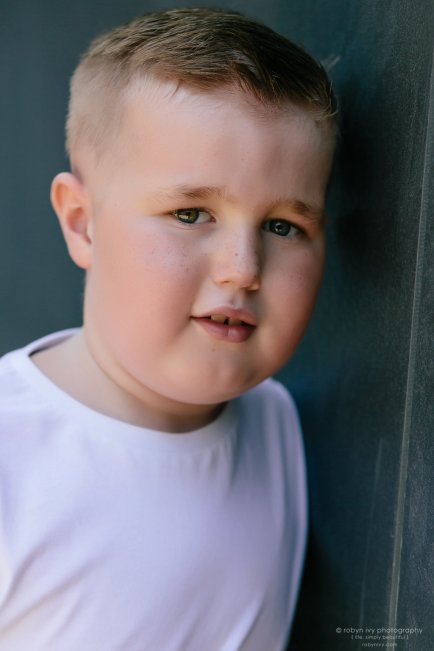 We got to meet 7-year-old Luke and his brothers Lewis (5) and Lochlin (1) when his parents were looking into hyperbaric oxygen therapy on the first day of our trip. Hanging out in the clinic waiting room, the boys made silly Snap Chat faces with Lily, and his father Mark told us the story in his thick Scottish brogue of how they arrived in Mexico, while mom Jenny met with the doctors. Luke sealed our short visit with a kiss straight on the lips.

We met again a couple days later at the pool outside their apartment. This cuddly bear of a boy takes no prisoners when he decides to let you into his inner circle. (He’s even been known to chase people down for leaving without a smooch.) Sitting close enough to snuggle if necessary, Luke talked about his love of football and his dream of one day becoming a Formula One driver. Or an architect. Why limit one’s options?

Luke gave his mum some sage advice after she’d spent a full week away from the family in the hospital after baby brother Lochlin’s birth: I don’t think we’re having any more babies. From day one, Luke’s protected Lochlin against all threats, real and perceived—like Lewis. He’s always loved to push Lochlin in his pram, which he can do again now. 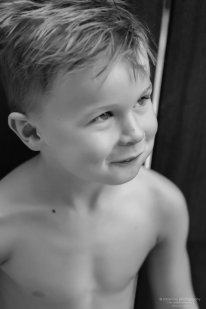 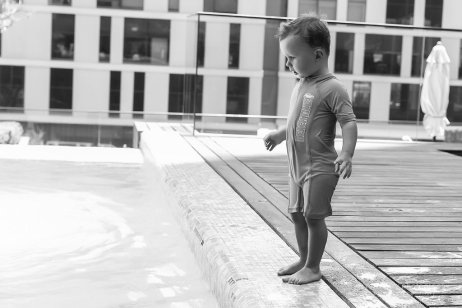 Luke’s considerateness isn’t confined to his family. Jenny tells of a time when his little friend next door broke his arm and therefore struggled at school. Luke carried the boy’s bag for him, helped him with his jacket, and even tried to help him eat!

Luke enjoys playing with his brothers again—fights and all—thanks to the treatment he’s receiving in Monterrey. They race to jump into the pool together on cue, Luke swimming to the edge and using his left arm to aid his right one when it lags behind. 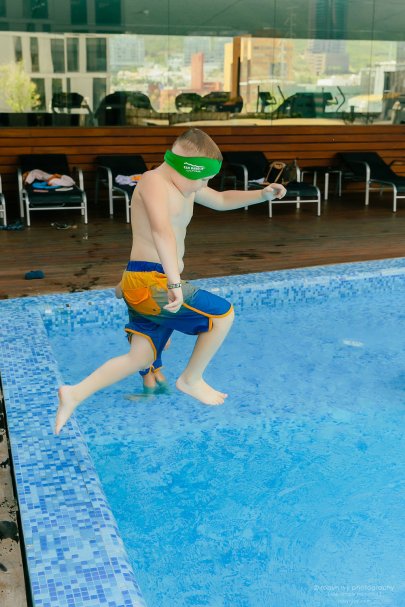 Splashing around in the water with his siblings at all is a huge accomplishment, considering where Luke was a couple of months ago. Lewis couldn’t understand why his brother wasn’t answering his requests to play or even talk with him, and Jenny described Luke as looking glassy-eyed and unresponsive. He was declining rapidly, and hope seemed far off.

Luke had just turned 7 when he started having trouble swallowing, slurring his speech, experiencing headaches, and drooling. His walking had also become unbalanced. A CT scan showed a tumor as the cause, and a follow up MRI pinpointed its location in the pons, confirming the diagnosis as DIPG.

Jenny explains that Luke knows he has a “lump,” for which they’re trying to get him help. They haven’t told him that it’s cancer, and neither he nor his brothers know the prognosis. “I need to protect Luke and don’t let him know too much about his condition. He is a thinker and way beyond his years. He asks loads of questions”.

Luke underwent 30 sessions of radiation after diagnosis, and they’d just travelled to London to pursue CED at the Harley Street Clinic, but Luke’s tumor had developed cysts, disqualifying him for the trial. Fortuitously, Mark and the boys met up with Scott Lau’s family at a football game, and Scott told him about the treatment in Monterrey, where they were heading shortly for his daughter Kaleigh.

The Stewarts followed soon after, arriving in Monterrey on May 2nd. By the time we’d met, Luke had already received three IA treatments and one immunotherapy. “I believe we were meant to be here and there is a reason we were turned away for CED,” Jenny says.

The difference in Luke was almost immediately apparent even after his first IA treatment. He was less sleepy, and able to wean off steroids without any problems. He fully engages in conversations, runs around with his brothers, and uses his right arm more every day. “Now we have hope, big hope,” Jenny says. 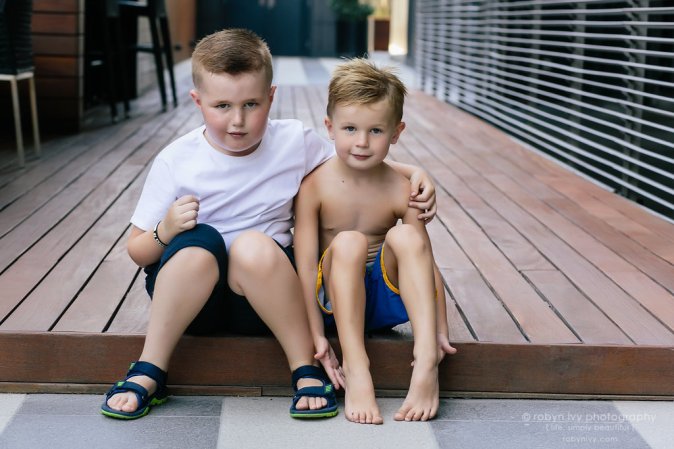 Jenny and Mark take Luke’s illness in stride with everything else thrown their way. They treat Luke the same as his siblings, and don’t panic over little setbacks, maintaining some much-needed normalcy in all of their lives. But don’t interpret that as a sign of their giving up: Jenny maintains a perpetual presence on social media, regularly posting pictures and updating Luke’s faithful followers on his progress, and she hunts down every available treatment option for her son. She’s an untiring, fearless constant in his life, aiming to ensure he has the best chance at beating this disease. “I wouldn’t be a mother if I didn’t do everything in my power,” Jenny says. “I’ll never give up trying to save him.” 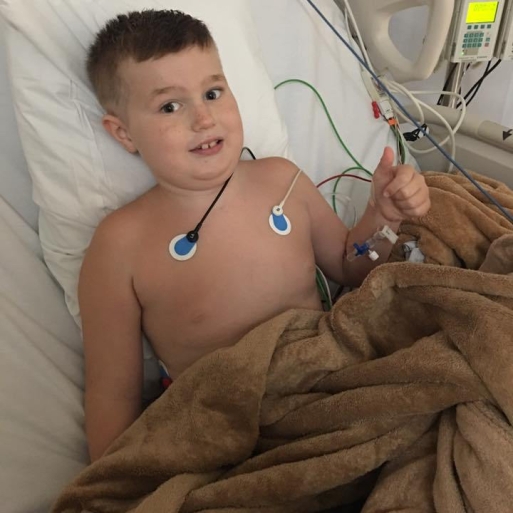 Before and after each treatment, Luke gives a sporty thumbs up to tell the world he’s OK, and we’ve come to look forward to and rely on his cheery optimism in return. Now people from around the globe are posting selfies with #thumbsupforluke. Though it’s far from a fair match, we’re certain you’ve got this one, Luke. 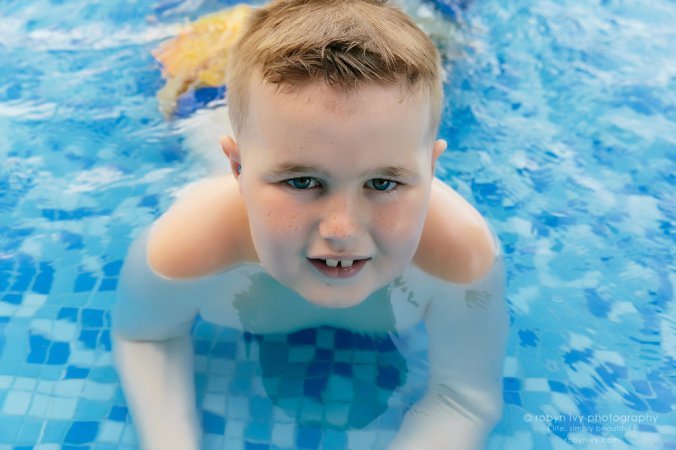 Luke gained his angel wings on July 10th, 2018. His legacy lives on in everyone who loves him.

To make a donation:

© 2017-present. Unauthorized use and/or duplication of this material without express and written permission from this site’s author and/or owner is strictly prohibited. Photos may be shared with express and written permission from the photographer with proper attribution. Excerpts and links may be used, provided that full and clear credit is given to Kimberly Beauchamp, ND and Making DIPG History in Monterrey, with appropriate and specific direction to the original content.

The information contained in this site is for educational and/or informational purposes only, and is not intended to diagnose, treat, or prevent any condition. If you have any concerns about your own health or that of a family member, you should always consult with a healthcare professional.

The author, Kimberly Beauchamp, ND, declares no conflicts of interest, nor is she affiliated with the doctors or the clinic.